Landfill gas (LFG) is produced by the anaerobic decomposition of buried organic waste. Municipal solid waste landfills produce significant quantities of LFG, and LFG will continue to be produced long after a landfill is closed. LFG typically has a methane content of about 40 to 55 percent. The balance is primarily carbon dioxide. If LFG is not beneficially used, it is incinerated in a flare. However, flared LFG represents a wasted energy resource.

LFG can be, and has been, productively utilised as a substitute for natural gas at an end user’s gas burning equipment, for electric power generation, and to produce high quality gas for direct injection into natural gas pipelines. A variety of technologies have been used for electric power generation, including reciprocating engines, combustion turbines, steam cycle power plants and microturbines.

The rate of LFG production is also affected by waste composition and landfill geometry, which in turn influence the bacterial populations within it, chemical make-up, and thermal characteristics. 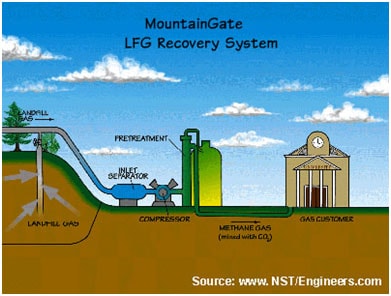 In early 2008, Waste Management entered into a joint venture with Linde North America a leading global gases and engineering company. Their aim was to build a plant and convert landfill gas to liquefied natural gas (LFG to LNG biomethane) with a facility at the Altamont Landfill in Livermore, California. At this location, landfill gas is now being collected and processed to create clean, renewable fuels to “close the loop” on waste collection.

Since September 2009, when the commissioning process began, the plant has produced 200,000 gallons of LNG. To completely close the waste management loop, 500 of Waste Management’s trucks throughout California are now running on the LNG created at the Altamont plant, instead of filling up with diesel (Treehugger).