The fixed dome biogas system is also known as Chinese model biogas plant which was developed and built in China the 1930s. The unit consists of an underground brick masonry compartment (fermentation chamber) with a dome on the top for gas storage. 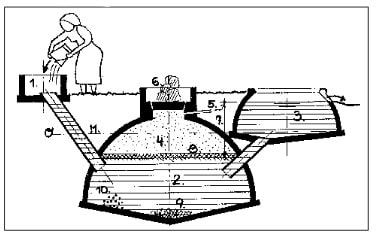 A fixed-dome biogas plant consists of an enclosed digester with a fixed, non-movable gas space. The gas is stored in the upper part of the digester. When gas production commences, the slurry is displaced into the compensating tank. Gas pressure increases with the volume of gas stored, therefore the volume of the digester should not exceed 20 m³. If there is little gas in the holder, the gas pressure is low. If the gas is required at constant pressure (e.g., for engines), a gas pressure regulator or a floating gasholder is required. Engines require a great deal of gas, and hence large gasholders. The gas pressure then becomes too high if there is no floating gasholder.

Disadvantages:
Plants often not gaslight (porosity and cracks), gas pressure fluctuates substantially and is often very high, low digester temperatures.
Fixed-dome plants can be recommended only where construction can be supervised by experienced biogas technicians.

In 1984 the Action for Food Production (AFPRO), group based in New Delhi, India modified the original fixed dome biogas design to bring down the construction costs. This model proved to much cheaper than other fixed dome designs used at that time in India. It also proved to be about 45 percent cheaper than a floating drum plant of comparable size. Deenbandhu plants are made entirely of brick masonry work with a spherical shaped gas holder at the top and a concave bottom. The Deenbandhu model is now the most commonly constructed plant in India with more than 3 million plants built. 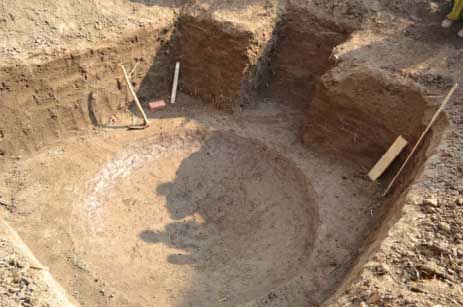